Roofing is a messy job, no two ways about it. Because of the amount of debris it creates, cleanup is half the battle. Shingle shrapnel makes for heavy loads. Far worse, nails can find their way into landscaping and grass. Hello, landmines. Hello, tetanus. Hello, lawn mower that spits out metal projectiles.

We take cleanup very seriously—so seriously that we even hired a guy whose sole purpose is to catch roofing debris before it ever hits the ground. Meet Max: 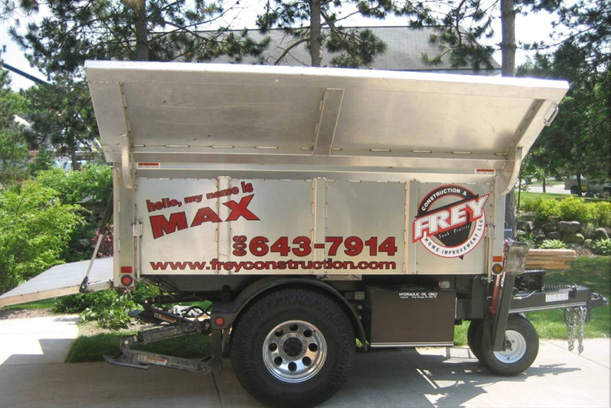 Max has actually been with us for quite some time now. Sometimes we joke that he’s our best employee, since he’s never late, never complains, and can’t throw out his back. As you can see, he’s not a really a he at all. But you know how some people name their beloved boats and cars and then start talking about these things like they’re people? That’s kind of how we feel about Max. He’s a prized possession that we love to show off.

Max is a self-propelled dumpster. We tow him to job sites, but once there, he’s self-propelled by means of a gasoline engine. Max can be run along a roof edge to collect the thousands of nails and tons of roofing debris that would take a normal “guy” hours of blood, sweat, and tears to clean up. He is such a great answer to the problem of having a dumpster on the ground for laborious work done well above ground. (Take a drive by other job sites where things are done old school, and you’ll see roofing material being literally thrown into dumpsters below. It’s like a basketball game.)

It’s easy to see how Max is a boon to us. He obviously eases the cleanup work we need to do when working on a roof. But when it’s your roof we’re doing, he’s also a boon to you. He protects your lawn and landscaping in a way that just wasn’t possible before the likes of Max was invented. And because of him, you and yours can run around barefoot without worrying about stepping on a nail—no landmines!