Chat
Schedule Your FREE Design Consultation!
Start Your Project
Get a Free
consultation

Southern Wisconsin, get ready to rumble! This weekend we’re due for the first major snowstorm of the season. Mother Nature is poised to dump a half-foot of snow on us, right atop a layer of ice. It’s going to be a doozy.

When bracing for these winter storms, most folks think only about the safety of roads, sidewalks, and driveways, often forgetting about their roofs. If you’re one of those people, read on. Left unchecked, heavy snowfall is a strain on your roof and a hazard to your home’s interior. And if the winds are blowing, it’s even worse. That’s because snowdrifts tend to be denser than plain old snowfall. You need to get rid of that snow before it melts, so that it doesn’t stand a chance of morphing into an ice dam. 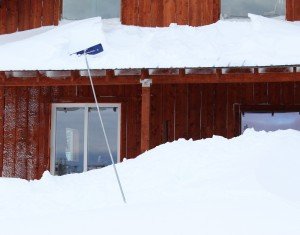 An ice dam is a thick, heavy, troublemaking ribbon of ice that forms at the edge of a roof. It blocks proper drainage of snowmelt, causing a build-up of water. This water can seep under the shingles and into the house, causing serious damage to your insulation, walls, ceiling, or all of the above. Rather than spend a pretty penny to repair this kind of damage, we suggest you spend some pocket change to have the snow removed. And we don’t suggest doing it yourself.

Do-it-yourself roof rakes are an inexpensive—but back-breaking—way to avoid the dangerous option of climbing atop your roof to shovel. (We hesitate to call roof-shoveling an option. It more accurately falls under the heading of “Don’t Try This at Home.”) The problem with raking your own roof is not only that its hard work or that you could pull heavy snow or ice onto yourself or your landscaping. It’s also that many people unwittingly take years of life off their roof. How? They inaccurately gauge the proper pressure to use, failing to leave enough of a buffer of snow between rake and roof.

We offer roof-cleaning services that preserve the integrity of your roof while also protecting your home’s interior from cracking and water seepage. The best time to leave it to a professional is after a major snowstorm like the one we’re expecting this weekend. Call ahead or call after the storm. Either way, we can help!